The key to good management of chronic respiratory illness, such as asthma and COPD, is consistency – measuring, monitoring and adherence to prescribed medication. Empowering the patient to take the management of their condition in their daily routine saves time and resources for the healthcare professional as well. With relevant and reliable data in an organized digital form, the valuable time on the doctor’s or nurse’s appointment can be invested in creating and updating the essential asthma action plan rather than sorting out inconsistent, often manually kept records and notes.

KAMU Asthma® is a new way of thinking respiratory care. It enables the patient to take a spirometry test at home and track their symptoms and adherence to medication with quick, easy-to-use and comparable questionnaires. Combining external trigger data to this patient-provided information, KAMU creates reports that help both the patient and their healthcare professional understand the condition better – possibly even predict changes and take action to prevent symptoms from occuring. Sharing reports in a digital form can save time and also enable better care remotely. KAMU takes a holistic, adherence-driving approach to respiratory care. Regularly measuring their lungs at home with KAMU Spiro, and keeping track on their symptoms, triggers and use of medication, the patient can not only feel better but also provide a constantly updating anamnesis, which enables cost-efficient remote consultations. Spirometry with KAMU Spiro is automatically quality controlled, according to ATS/ERS guidelines. The service guides and instructs the user in taking the spirometry test.

The KAMU app has a built-in medication tracking to support most commonly used respiratory medications minimizing the need and work required for manual input. If needed, new medications can be added manually by the user or by the care professionals. The personal asthma action plan is always present, as KAMU supports the user in good self-care and drives adherence to medication. When the patient is empowered and motivated to keep KAMU in their daily routine, they are more likely to feel better and achieve a good treatment balance. “KAMU is easy and nice to use. It has become a natural part of my morning routine.”

“The trend view makes it clear and visible for me how the seasons and pollen affect my condition and lung values.”

Mike is a well-grown first grader in elementary school. He has had atopic skin rash now and then, and his parents have observed wheezy breathing sometimes in the morning. He is good at running and other activities, but once in a while he has tightness of breath. He once had a wheezing episode during the grass pollen time.

Pediatric findings have been normal, but Mike has been given a blue reliever aerosol to be used in need. Now his parents, teacher and school nurse want to know, whether Mike has bronchospasm during the day, and if he needs maintenance medication to control or prevent asthma.

Mike is already handy with a smartphone, and he is now given the KAMU Spirometer. He and his parents are instructed for the use of the apparatus, and after an instruction period Mike is doing supervised monitoring. Most days the readings are normal, but there are some mornings with lower values, and in the afternoon greater transient drops after exercise. Those are are relieved after taking blue salbutamol inhalation. The doctor confirms the asthma diagnosis and Mike begins to use inhaled corticosteroid as maintenance medication.

KAMU Spiro -spirometry test is first done daily to verify good effect, and then once a week. Mike records his symptoms and medicine intake through the phone application. His parents check it daily in the beginning, but let Mike take care of it most of the time. A treatment Action Plan is set up. The follow-up records are sent to the pediatrician at agreed intervals.

Lisa is a young sales assistant in a sports outfit company. She is also active in endurance sports, running in the summer and skiing in the winter. Lisa participates in cross-country competitions on a regional level. She had a healthy childhood, although there were instances of prolonged respiratory infections with cough and sometimes minor wheezing.

At work she was exposed to warehouse dust and observed respiratory irritation. Then breathing became occasionally difficult in cold air at heavy exertion. Uphill skiing during competition brought up dyspnea and wheezing. This formed a handicap in competitions and Lisa decided to contact a physician.

Her physical and laboratory findings were normal, but the symptom history consisted of bouts of bronchospasm. The clinical diagnosis was sports asthma, but to ascertain and grade the bronchial obstruction Lisa was given the KAMU spirometry with the concomitant smartphone application. She was also given a blue formoterol aerosol inhaler to assess the effect of medication.

The subsequent follow-up showed normal spirometry values most of the time. There were small dips in the FEV1 without symptoms during the day, but especially in the morning. With physical exertion there were greater dips correlating with slight difficulties in breathing. These symptoms eased with reliever medication, and FEV1 returned to normal.

In connection with ski training, greater FEV1 diminution was recorded, and some occasions required immediate reliever medication. The observations ascertained the asthma diagnosis and Lisa began using continuous controller & reliever medication (ICS-formoterol) twice daily. The symptoms almost vanished. Lisa learned to monitor her condition and could exercise competitively. Her physician and trainer got an easy way to observe the condition and the need of medication.

Mary is a middle-age department store bookkeeper. In her younger years, she used to work in a bakery. During that time she developed baker’s asthma due to exposure to the grain and flour dust in the factory. There were no specific respiratory problems in the beginning, but slowly she began to experience cough and wheezing. The symptoms she had from respiratory infections lasted longer in respect to other workers.

Then she began to have dyspneic spells, and was once taken to emergency because of asthmatic attack. Since then she has been on asthma medication – now taking regularly inhaled corticosteroids as the controller medication, but combined with long acting betamimetic adrenergic medicine. She also needs a short acting relief inhaler and occasionally oral medication.

Although she knows her disease rather well, there are periods of slow deterioration which she does not detect readily. The breathing becomes arduous and the relief medication does not help in prescribed doses. Mary has an Asthma Action Plan that was made quite a while ago, but she seems to forget to use it regularly.

After an acute worsening, she was admitted to the local hospital for a while for evaluation. The respiratory function and other parameters were measured, and new drug treatment installed.

Mary also got the KAMU Health Asthma Application with the spirometer. After training she agreed to follow her condition daily. The application also prompted her to jot down symptoms, reminded of medicines, and asked to measure ventilation with the spirometer. Through follow-up contacts, Mary, her physician and respiratory nurse agreed on a better control of the disease. Mary learned to rely on guided self-management, which included adjustments of the medication.

John is a retired construction worker. He used to be a heavy smoker, but quit smoking on retirement, partly because of dyspnea on exertion, but also following the advice of his wife and doctor. He is coughing lightly through the day, and has been classified to suffer from chronic bronchitis. During recent years, he has had prolonged pulmonary infections requiring treatment with antibiotics.

John must stop once in a while when walking hastily or uphill. Obstructive impairment of ventilation has been verified in hospital examinations. He also has moments of difficult breathing, often accompanied by wheezing. He is using an inhaler containing combinations of bronchial reliever drugs. John takes them rather irregularly, and there is a need to know better what the current mechanism of dyspnea is.

This patient’s physician recommended that John follow his condition with the KAMU Health application. First the respiratory nurse instructed John thoroughly on how to use the application and how to blow into the spirometer. Then a two-week observation period with regular measurements and ongoing medication was agreed upon. Then the results were examined at the doctor’s office. Next a renewed Asthma Action Plan was made, and John’s medicines were also adjusted. Daily prompts for recording symptoms, intake of medicines and spirometry timetable were recorded on John’s phone.

John got a better understanding of his basic chronic lung disease, but also understood how bronchospasm and sputum retention worsened the situation during exacerbations. Slowly John mastered the use of the KAMU Asthma application and learned to send the reports to his nurse, and sometimes directly to the doctor. He got more precise instructions, and obtained the benefits of guided self-management with much fewer sudden impairments of breathing. 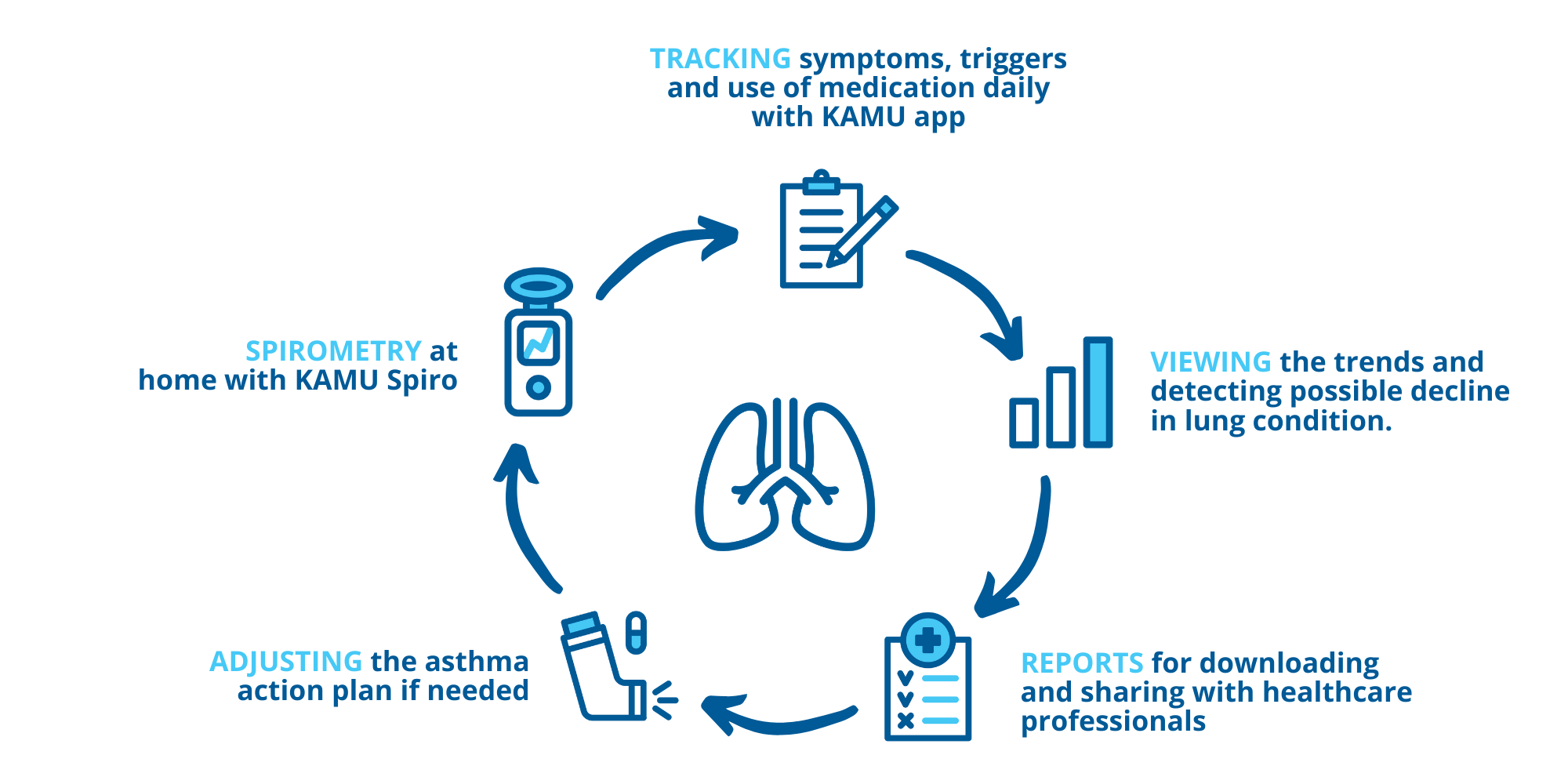 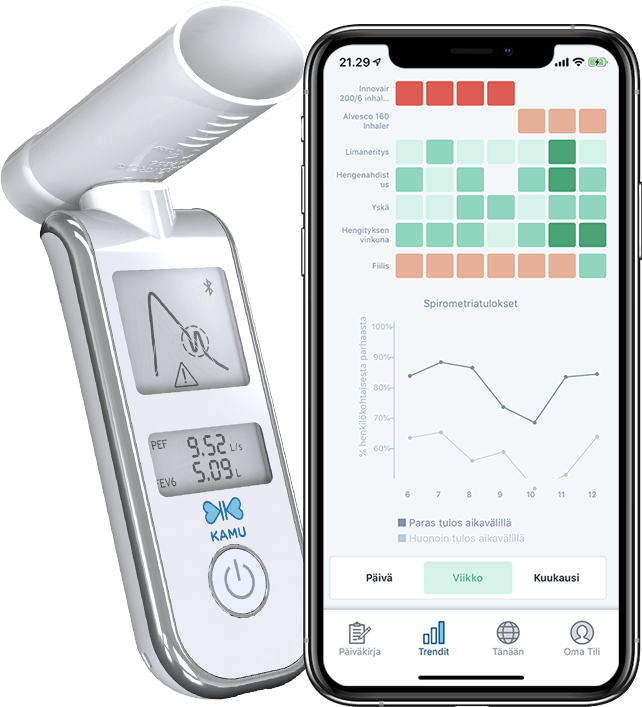